Campus athletics have come a long way over the years and are not just for collegiate level athletes anymore. Facilities for recreational activities on campus have seen a tremendous amount of growth and improvements for the students and staff they serve. And for colleges that have a long history and the historical buildings to prove it, the challenge is always the same, combining the new with the old, and where to find the space to put it. The new Sumers Recreation Center at Washington University is one of those projects. The athletic complexes at Washington University recently underwent a major renovation that was completed in October 2016, and included more than 70,000 sq ft of various Robbins systems installed by Robbins dealer, Missouri Floor Company.

The project was not your ordinary rec center and was instead, a bit of a hodge podge of new and old buildings. Since the university is located within the city walls of St. Louis, MO, the location of the rec center was land locked, which meant the building had to go “up” instead of “out”. The project included a new 65,000 sq ft building addition, a renovation to the historic Francis Gymnasium which was host to the 1904 Olympics and World’s Fair, and renovations to the existing athletic complex which was constructed in 1983.

The new rec center has received national attention since its debut. It was chosen as a location for one of three 2016 presidential debates. It has also received attention for the unique and stunning graphics in the gymnasium. On top of the 25,000 square feet of Robbins Bio Cushion Classic floor, Washington University pays homage to the city of St. Louis by featuring graphics of the 1904 World’s Fair building, the Francis Fieldhouse gates, and the famous St. Louis Gateway Arch. The graphics were designed and finished on site by Missouri Floor Co. The arch was a 1:5 scale model of the real arch, and two stain colors were used to give the graphics a 3D appearance. 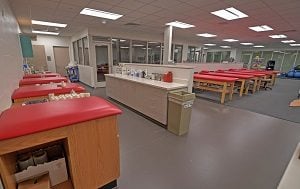 In addition to the recognition given to the city and university’s history, the original Francis Gymnasium which was constructed in 1903 for the 1904 Olympics and World’s Fair, was semi demolished during the construction process. The university wanted to make sure this
history was not lost and decided to incorporate part of it in the new space. The maple flooring from the Francis Gymnasium was reclaimed, installed and then sanded and refinished on the main passage way into the building. The back of the reclaimed maple was stamped “Yawkey Bissell”, which was the name of the original Robbins flooring plant in White Lake, WI and is still in full operation today. Missouri Floor Co. and the Sumers Recreation Center has also been named a finalist in Robbins’ Sports Surface of the Year Contest.

From start to finish of the flooring, the project was completed in 7 weeks. The university is very pleased with the outcome of the graphics, as well as the flooring that was hand selected for each area of the building. Robbins and Missouri Floor Company has had a long standing relationship with Washington University. Alex Verseman of Missouri Floor Co. attributes the success of this project to that relationship, “we had a history with the owner that dated back to the original athletics building construction in 1983. This was developed by past generations of Robbins and Missouri Floor, but never forgotten through the family businesses. We kept a strong relationship with the owner over the years through maintenance, misc. projects across campus, and sharing dreams of this project. When it finally became a reality it was a test of the
relationships between all 3 parties and the outcome was a success we’re all proud of!”. Both Robbins and Missouri Floor Company are over 100 years old. And when a company has been around that long, it is safe to say they have witnessed a lot of change. Ten decades of nonstop technological advancements is bound to make a huge difference to any product or service. But one thing remains the same, the importance of quality products and quality relationships. Robbins is proud to be associated with and chosen for this project. From the days of Yawkey-Bissell flooring to now, we look forward to another 100 years serving the students at Washington University with our high performance sports floors.

Robbins Sports Surfaces, a division of Robbins, Inc., is a privately held, 4th generation family-owned flooring company based in Cincinnati, OH with sales offices across the U.S. and manufacturing plants in Michigan and Wisconsin.